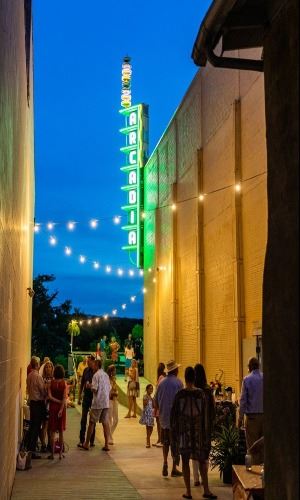 Arcadia Live! and the future site of the Heart of the Hills Heritage Center are currently being considered for the brick relocation sites. As soon as a decision has been made, those who submitted interest will be contacted to have the opportunity to receive their brick like initially requested, or choose that their brick be relocated.

The downtown Kerrville Memorial Brick program began in 1993 as a fund-raising project to support the Main Street Program budget. The goal of the program was to incorporate named or memorial bricks donated by individual citizens into the sidewalks of a three block area: the 700 and 800 blocks of Water Street and the 200 block of Earl Garrett Street. Funding from the program assisted in supporting downtown beautification projects including the Texas Star at Water and Earl Garrett streets.

The initial bricks were a D’Hanis brick, a somewhat soft mortar, that over time was easily chipped and eroded by the weather. In the early 2000s, newly purchased bricks with additional concrete were used in an attempt to stem the erosion although tree roots and heavy vehicles have continued to cause brick damages over the years. Persons who purchased a memorial brick paid $50; the order form did not allude to permanence or perpetual care.

In 1995, the city cataloged the bricks into an Excel database by location. However, in 2019, because of safety and liability concerns related to erosion of bricks, the city conducted an assessment of damage to the bricks.

In Fall, 2019, the City of Kerrville revived the Main Street Program, by receiving a designation as a sustaining member of the Texas Main Street Program, and created a Main Street Advisory Board (MSAB), which is comprised of property and/or business owners within the designated Main Street boundaries, and must be residents of Kerr County. It was believed that Main Street resources could assist in meeting the goals and objectives of the Kerrville 2050 Comprehensive Plan. All regular MSAB meetings are open to the public and are advertised on the City of Kerrville’s website, just like any other City board and commission meeting. The first meeting of the newly-appointed members of the Main Street Advisory Board was on November 20, 2019. The board’s most immediate concern was to address the deteriorating condition of the memorial bricks lining the city’s downtown streets, which pose a potential threat to citizen and pedestrian safety after many years of weather exposure, pedestrian foot traffic, and damage from motorist vehicles and delivery trucks. These damaged bricks are located within the Public Right of Way along the sidewalks downtown, which are maintained by the city and are in need of repair in some areas. As such, the issue of what to do with the damaged bricks in these areas was discussed in almost every monthly MSAB meeting over the last two years.

In January, 2021, an ad-hoc sub-committee of the Main Street Board was formed to provide a recommendation on how to proceed with the memorial brick program. During this time, members of the sub-committee conducted an assessment of the three blocks. A major area of brick damage was identified by the City in front of 707 and 709 Water Street, and these were removed to storage and replaced with pavers. However, the assessment report noted that two tree wells in front of 713 Water and near the Arcadia are endangering pedestrian walkability. Serious areas of deterioration were noted in the large apron area in front of the Arcadia, in the front door area of Francisco’s (201 Earl Garrett), and the outside seating area in front of the restaurant. Likewise, two tree wells in the 800 block of Water Street and the corner apron at Water and Washington Street also have major damage and are a risk for pedestrians. The committee looked into a number of ideas for repairing the bricks or moving them to a new location, but those options were not found to be feasible. The recommendation that was determined most feasible long-term was to offer to return the bricks to their original donors, and create a webpage to honor and recognize those who originally purchased bricks, along with the inscriptions recorded.

The memorial bricks in the three blocks of historic downtown Kerrville sidewalks are a safety hazard to pedestrians. Removal of the bricks and pavers is necessary to eliminate the hazards and to develop coherent, safe sidewalks in historic downtown now and for the future. A small portion of the bricks have been removed in the 700 block of Water Street and are currently in storage; the section has been replaced with temporary pavers, but will likely be permanently replaced with stamped concrete.

As Kerrville citizens and friends of Kerrville purchased the bricks over the thirty year period, two areas of need were identified:

1) a method to disperse the removed named bricks to individuals who purchased the brick and wish to have it because of sentimental value; and

2) a mechanism to recognize and preserve the names and memorials on the approximately 3035 named bricks.

Recommendations Approved by the Main Street Advisory Board

1. Assess the level of interest among individuals who purchased a named brick by describing the planned dispersal of the named bricks in local newspaper articles and social media, beginning the first week in July, 2021. Individuals will be directed to fill out a web-based form requesting the return of the brick, if desired, and to send the form within a limited time period (45 days). This form will be administrated by the Main Street Board, and a list of requests will be compiled and forwarded to city staff at the end of the time period. Those requesting the return of the brick will be notified when the bricks are removed and given a time-frame for retrieval.
Approximately 100 bricks have been removed and stored as of July, 1, 2021. The assessment of interest process will provide concrete information regarding the scope of interest and facilitate dispersal by early Fall, 2021. Once removed, the bricks will be stored by street location. A group of volunteers will help locate and facilitate the pick-up of bricks from the parties who submit interest.

2. Develop a digital Memorial Wall that can be placed on the City of Kerrville Website and other digitally-related resources specific to downtown Kerrville, that identifies the named bricks as well as the location of the original brick.
This would be a no-cost approach to preserving the memory of the named bricks and potentially reach a wider audience of donors.

At the posted June 23rd Main Street Advisory Board meeting, which was open to public comments, a recommendation was presented by the sub-committee, and passed unanimously by the Main Street Advisory Board. This recommendation was compiled due to the inherent need to address the condition of the deteriorating bricks downtown pertinent to citizen and pedestrian safety. Once removed, the memorial bricks will be stored at a city facility while they are being returned to those that express interest. A webpage has been generated to capture survey information for those interested in having their brick returned (bricks.kerrvillemainstreet.org). On August 23, 2021, the information will be compiled, and the Main Street Advisory Board will arrange for a group of volunteers to gather these bricks and return them to interested individuals.